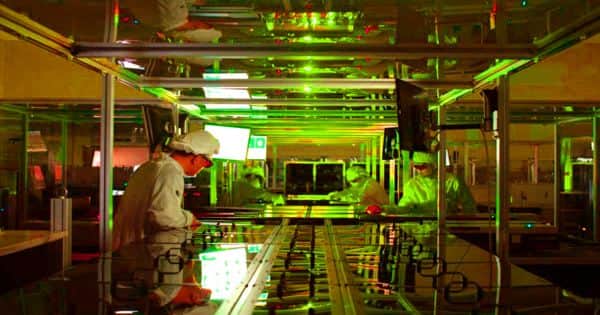 Scientists have created the most powerful laser ever created. The intensity of the light beam is 1023 W/cm2, which is equivalent to concentrating the entire luminosity of the Sun into an area the size of a small office desk. And, yes, the desk would be completely destroyed under those circumstances.

Researchers were able to focus laser pulses on a spot just over one micrometre in size, which is less than one-fiftieth the diameter of a human hair. The ‘unprecedented’ laser intensity is comparable to focusing all of the light reaching Earth from the Sun on a spot 10 micrometres in size.

The achievement, which was published in the journal Optica, is a more than tenfold improvement over the previous highest intensity achieved in 2004 at the University of Michigan. The production of an ultra-intense laser beam necessitates two critical steps. You must have a very powerful laser and the ability to focus it on a very small area. The team at the Institute for Basic Science’s (IBS) Center for Relativistic Laser Science (CoReLS) in South Korea accomplished both.

The powerful laser can be used to investigate phenomena thought to be responsible for high-energy cosmic rays with energies exceeding a quadrillion (1015) electronvolts (eV). Although scientists know that these rays come from somewhere outside our solar system, how they are formed and what forms them has long been a mystery.

Scientists have developed the most intense laser ever created. The creation of an ultra-intense laser beam requires two crucial things. You have to have a very powerful laser and you have to be able to focus it on a very small area.

They used a pulsating laser with a 4 petawatt power output (1015 or 1,000 trillion watts). This is one of the most powerful in the world, and scientists are already planning something 1,000 times more powerful.

Creating powerful lasers is a huge undertaking in and of itself, but concentrating the laser on a small area is even more difficult. Because even a small amount of distortion can have a significant impact, the laser beam must be distortion-free. The researchers used an off-axis parabolic mirror to focus a 28-centimeter (11-inch) laser beam to an area 1.1 microns across. That area is smaller than the surface of an E. coli bacterium.

Even with the most advanced setup, air turbulence and beam pointing were able to change the peak intensity by around 20%. That variation is more than twice as powerful as the University of Michigan’s laser from 2004.

This accomplishment is not only exciting from a technical standpoint. Creating such a powerful laser allows for the study of extreme physical phenomena at the cutting edge of particle physics and astrophysics.

“This research has demonstrated that the CoReLS PW laser is the most powerful laser in the world.” “CoReLS’s director, Professor Nam Chang Hee, made the announcement in a statement. “With the highest laser intensity ever achieved, we can tackle new and challenging areas of experimental science, particularly strong field quantum electrodynamics (QED), which has previously been dealt with primarily by theorists. In the nonlinear regime, we can investigate new physical problems of electron-photon scattering (Compton scattering) and photon-photon scattering (Breit-Wheeler process). This type of research is directly related to various astrophysical phenomena that occur in the universe, and it can help us to broaden our knowledge horizon.”

The researchers are using these high-intensity pulses to generate electrons with energies greater than 1 GeV (109 eV) and to operate in the nonlinear regime, in which one electron collides with hundreds of laser photons at the same time. This is a type of strong-field quantum electrodynamics process known as nonlinear Compton scattering, and it is thought to contribute to the generation of extremely energetic cosmic rays.

They will also use the ultra-high intensity laser’s radiation pressure to accelerate protons. Understanding how this process takes place could aid in the development of a new laser-based proton source for cancer treatments. The sources used in today’s radiation treatments are generated by an accelerator, which necessitates the use of a massive radiation shield. A laser-driven proton source is expected to lower system costs, making the proton oncology machine less expensive and thus more widely available to patients.

The researchers are still working on new ways to increase laser intensity without significantly increasing the size of the laser system. One approach would be to devise a new method of reducing the duration of laser pulses. With lasers with peaks powers ranging from 1 to 10 PW now in operation and several facilities with 100 PW on the horizon, there is no doubt that high-intensity physics will advance dramatically in the near future.