Home Physics The Problem with Sending People to Venus 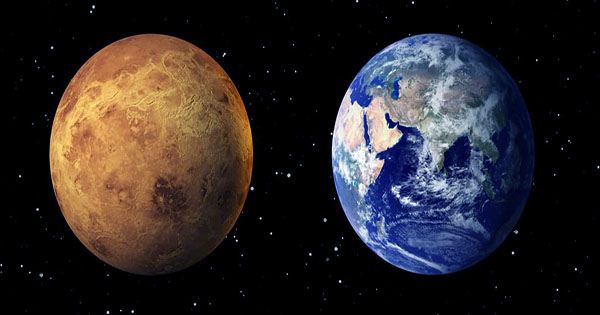 Venus, sometimes referred to as the “evil twin” of Earth, was born closer to the Sun and has since developed very differently from it. It has no magnetic field, a thick atmosphere rich in carbon dioxide, a “runaway” greenhouse effect (meaning heat is entirely trapped), and a surface hot enough to melt lead.

Over the following ten years, a number of unmanned research missions will examine how and why that occurred. However, some scientists now want to send a crewed expedition for a flyby there as well. Is that a wise plan?

Venus orbits the Sun at a closer distance because it has a smaller diameter than Earth. This implies that any surface water would have started its greenhouse impact by evaporating soon after it formed. Early and prolonged volcanic eruptions produced lava plains and boosted atmospheric carbon dioxide, which kicked off the runaway greenhouse effect and raised the temperature from just over Earth’s to its current maximum of 475°C.

The Venus year is shorter than ours (225 days), but it rotates much more slowly (243 days) and in a reverse direction to Earth. Due to the slow rotation caused by a weak magnetic field, the atmosphere is still being lost. The atmosphere of Venus “super-rotates” more quickly than the planet. Images from numerous missions display clouds with sulphuric acid droplet-based V-shaped formations.

Despite the severe environment, some scientists have hypothesized that Venus’ clouds may contain habitable conditions at various altitudes. Recent observations that appear to show phosphine, which is continuously produced by bacteria on Earth and is a possible indicator of life, in Venus’ clouds have been hotly contested. We obviously need to take more measurements and conduct more research to determine where it comes from.

Several earlier probes have provided us with the information we currently have about Venus. For instance, between 1970 and 1982, the Soviet Venera 7-14 probes were able to touch down on the hostile surface of Venus, endure for up to two hours, and transmit pictures and data. However, there are still unanswered concerns concerning how Venus differed from Earth in its evolution that is important for figuring out which planets around other stars can support life.

Scientists studying Venus should have a field day in the upcoming ten years. Veritas and DaVinci+, two missions scheduled to launch in 2028–2030, were chosen by NASA in 2021. EnVision will be put into orbit by the European Space Agency in the early 2030s. These missions, which complement one another and are unmanned, will help us learn more about Venus’ environment and history.

In order to ascertain Venus’ geological history, rock composition, and the significance of early water, Veritas will survey the planet’s surface. DaVinci+ is made up of an orbiter and a tiny probe that will enter the planet’s atmosphere and measure its composition as well as investigate how the planet formed and evolved and see if it ever had an ocean. EnVision will investigate the planet’s surface, subsurface, and trace gas atmosphere. Radar will be used to map the surface more precisely than ever before.

Shukrayaan-1, an unmanned mission planned by India, and Venera-D, an idea put out by Russia.

In the late 1960s, it was proposed to use an Apollo capsule to transport people around Venus in a crewed flyby. But after Apollo was completed, this notion was abandoned. The proposal is now being discussed once more, most recently in journal papers and at a recent meeting of the International Astronautical Federation, an advocacy group, in September 2022. The Artemis project, which aims to orbit the Moon, and other crewed mission ideas have led to this.

The plan would be to orbit Venus with a crew aboard and then come back to Earth. This would give researchers the chance to experiment with deep-space methods, such as how to manage a crewed mission with large communication lags with Earth. Thus, it might get us ready for a more complicated crewed Mars trip. The conditions are too extreme for the crew to attempt a landing or a genuine atmospheric research on Venus.

The experts who support this theory contend that using Venus’ gravity to change the spacecraft’s course toward Mars might save time and energy in comparison to traveling straight from Earth to Mars. That’s because the latter method would necessitate an alignment of the two planets’ orbits, necessitating waiting for the ideal time both on the way there and back. Going directly from Earth to Mars might keep designs simpler, while a crewed voyage to Mars would be rather difficult.

It won’t be any simpler to find living things if people are sent to a planet that might contain them. It is dangerous because we might contaminate the atmosphere before we find any life. Uncrewed probes are the most effective tool for searching for biochemical traces of life. Due to the closer proximity to the Sun, there would also be substantial temperature issues and more radiation from solar flares.

Furthermore, a flyby mission like this would only allow for a few hours of data collection on the inbound and departure routes. It would be a very costly endeavor, but it would undoubtedly result in some incredible photos and valuable extra data. This would not significantly extend the comprehensive and extensive tailored research now planned.

As a result, I think it’s quite improbable that there will be crewed missions to Venus.

Theoretical, more fantastical research has also been conducted, such as sending crewed airships to hover in Venus’ atmosphere rather than merely passing by. This is a good notion that might advance research more than a flyby, but for the time being it is still a far-off dream.

We are currently limited to crewed exploration in low-Earth orbit. However, the Artemis project seeks to ferry people around the Moon while also constructing a facility named Gateway in lunar orbit. Science will be conducted, crewed Moon landings will be possible, and most importantly, deep space procedures like refueling and functioning in an isolated environment will be tested. These techniques may one day help us travel to Mars without first completing training at Venus.