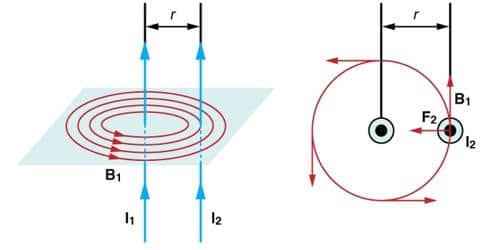 AB and CD are two straight very long parallel conductors placed in the air at a distance a. They carry currents I1 and I2 respectively. (Figure). The magnetic induction due to current I1 in AB at a distance a is 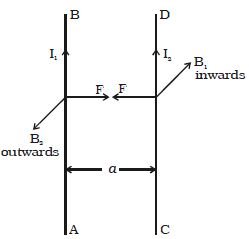 By Fleming’s Left-Hand Rule, F acts towards left. Similarly, the magnetic induction due to current I2 flowing in CD at a distance a is

This magnetic field acts perpendicular to the plane of the paper and outwards. The conductor AB with current I1, is situated in this field. Hence force on a segment of length l of AB due to magnetic field B2 is

Explain Lenz’s Law in a Consequence of Conservation of Energy