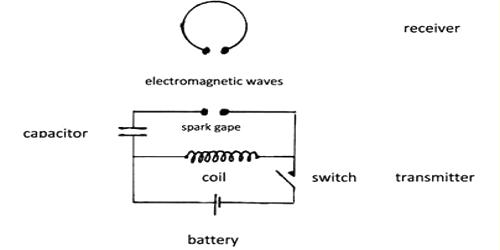 Hertz experiment consists of two metallic plates of equal size, placed 60 cm apart, held parallel to each other. The experimental arrangement is as shown in Figure. It consists of two metal plates A and B placed at a distance of 60 cm from each other. The metal plates are connected to two polished metal spheres S1 and S2 by means of thick copper wires. Using an induction coil a high potential difference is applied across the small gap between the spheres. The gaps were difficult to see and required that he perform his investigations in a darkened room. 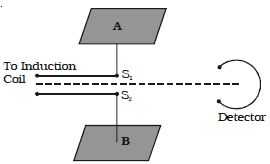 Hertz was able to produce electromagnetic waves of frequency about 5 × 107 Hz.

Here the plates A and B act as a capacitor having small capacitance value C and the connecting wires provide low inductance L. The high-frequency oscillation of charges between the plates is given by ν = 1/2π√LC.

Heinrich Hertz’s decision to go to Helmholtz and to work in his laboratory in Berlin had great significance for his career in research. In later experiments, he was able to calculate the speed of the radio waves he created and found it to be the same as the speed of light. A great number of subsequent developments, like radio and television, not to mention Wi-Fi, were spun out of his simple demonstrations. Hertz was well aware of the extent of his contribution.

Causes of Energy losses in a Transformer

How Energy Stored in a Capacitor