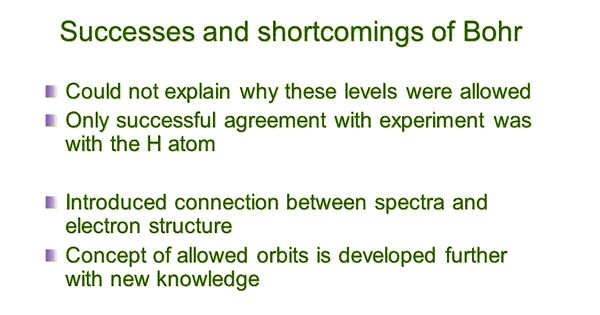 The shortcoming of Bohr’s Theory

Bohr’s theory was able to explain successfully a number of experimental observations and has correctly predicted the spectral lines of the hydrogen atom. It doesn’t explain about the energy of an atom and its stability. The most serious drawback of the model is that it is based on two conflicting concepts. According to this model, the state of equilibrium is determined by absolute rules while emission is interpreted on the basis of quantum theory. However, the theory fails in the following aspects.

(a) The first wrong assumption made by Bohr is considering the electron orbiting around the nucleus in a circular orbit, however, we know now that this is not correct, because electrons exist in a cloud.

(b) The theory could not account for the spectra of atoms more complex than hydrogen.