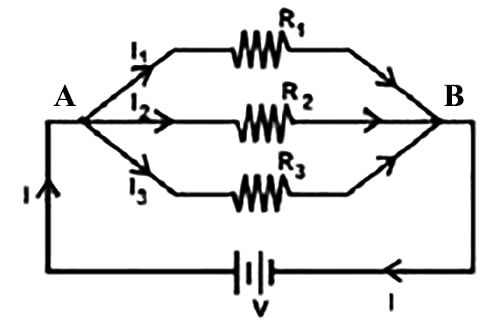 Three resistors R1, R2 and R are connected in a parallel combination. In this case, the same potential difference V is maintained across the two terminals of the three resistors. Different amount of current is flowing through each of the resistors owing to their different values. The main current I of the circuit splits into three parts at the junction a and later recombine at the point b. Let I1, I2 and I3 are the currents flowing through the resistances R1, R2 and R3 respectively. Therefore, some of the currents I1, I2 and I3 of parallel paths is equal to the current I at the junction a.

Here, the potential difference between the two terminals being V, applying Ohm’s law we get,

If instead of three resistances, n numbers of resistances are connected in parallel then the equivalent resistance Rp can be expressed as;