Home Physics What is Ultra Sonography?

Ultra sonography is a procedure that depends on the reflection of sound of high frequency. When sound wave of high frequency is reflected from an organ or muscle within the body, then an image analogous to that organ is foamed in the monitor by the reflected waves. The frequency of the ultrasound is 1-10 MHz which is used for diagnosis of diseases. In an ultra sonography machine, the high frequency ultrasonic waves are produced by electrically stimulating a crystal called a transducer. In an ultra sonography machine, the ultrasonic waves are transformed into a narrow beam. Next this beam is directed toward the organ whose image is to be recorded. 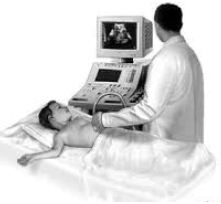 The beam is reflected, absorbed or transmitted by the organ toward which they are directed, depending on the nature of the surface they strike. As the beam strikes an interface or boundary between tissues of varying density (e.g., muscle and blood) part of the sound waves are reflected back to the transducer as echoes. The echoes are then converted into electrical impulses that are displayed on a monitor presenting a ‘picture’ of the organ or muscle under examination.

Ultra sonogram is used in medical tests of different kinds, such as- gall bladder stone, defect in the heart and identification of tumors When ultrasound is used for examination of the heart, then it is called echocardiography. Ultra sonography is a safer diagnosing method in comparison to X-ray. Yet, it is to be used for a very limited time. Besides, the transducer should always be kept in movement, so that it does not become static at any position.