Clearly with blends low in ethanol such as E5 and EIO the chief determinant in the vapour pressure will be the reid vapor pressure of the gasoline. The disproportionate effect of a small amount of ethanol on the vapour pressure is presumably due to the replacement of a miscellany of organic compounds with boiling points up to 200°C or higher with a single one of boiling point 78.5°C. The effect will be most marked when the gasoline with which the alcohol is being blended has a low reid vapor pressure because it is rich in the higher boilers. 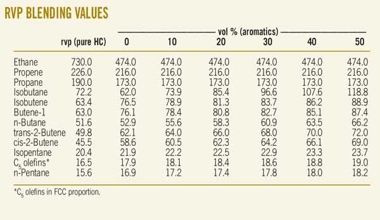 The figures in the fifth and sixth rows of the above table reveal this effect. The figure in the sixth row is for a simulated gasoline as described, this alone having an RVP of 17 kPa. In the work described in reference the gasoline alone has a RVP value of 57.6 kPa, which ascends by about 20% in going to E30 and E40, returning almost exactly to the TO’ value for E60.

All of the ethanol-gasoline blends in reference have an octane number of 95. The ‘E0 blend; that is gasoline alone, has a summer value of 58.0 kPa and a winter value of 87.5 kPa. Whereas low amounts of ethanol in a blend predominantly gasoline raise the reid vapor pressure  more than proportionately as noted, small amounts of gasoline in a blend predominantly ethanol appear, from the results in, to do likewise. A rise of over 50% in RVP occurs between El00 and E92.