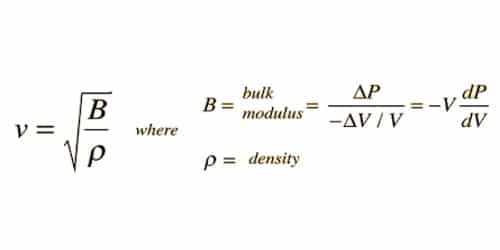 Newton assumed that sound waves travel through the air under isothermal conditions (i.e) temperature of the medium remains constant. According to Newton, when sound waves propagate in air, compression and rarefaction are formed.

The change in pressure and volume obeys Boyle’s law.

The velocity of sound in air at NTP is;

Newton assumed that the procedure is very sluggish and the heat produced during density is given to surrounding and heat loss during compression is gained from the surrounding. So the temperature remains steady and sound waves propagate through an isothermal procedure. That is, the heat produced during compression (pressure increases, volume decreases), and heat lost during rarefaction (pressure decreases, volume increases) occur over a period of time such that the temperature of the medium remains constant.

Calculation of Velocity of air –

Now, the velocity of sound in air using Newton’s formula at NTP (Normal Temperature and Pressure) is given by:

Calculation of velocity of sound in air with Newton’s formula.

Moment of Inertia and its Physical Significance

What is Projectile Motion

Explain Conditions of Equilibrium of a Rigid Body

What is Progressive Wave?