In fact, the centrifugal reaction is a pseudo or apparent force, acts or assumed to act because of the acceleration of the rotating body. In the case of a stone tied to the end of the string is whirled in a circular path, not only the stone is acted upon by a force (centripetal force) along the string towards the center, but the stone also exerts an equal and opposite force on the hand (centrifugal force) away from the centre, along the string. On releasing the string, the tension disappears and the stone flies off tangentially to the circular path along a straight line as enuciated by Newton’s first law of motion. 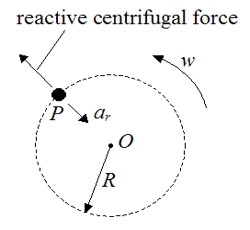 When a car is turning round a corner, the person sitting inside the car experiences an outward force. It is because of the fact that no centripetal force is supplied by the person. Therefore, to avoid the outward force, the person should exert an inward force.

Motion of Projectile Projected at an Angle with Horizontal

Explain Equilibrant in terms of Newton’s Second Law of Motion