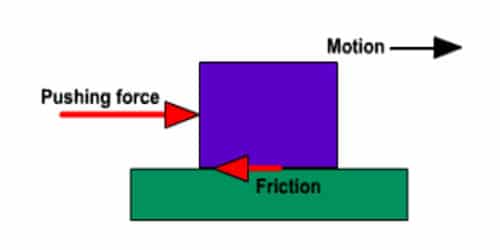 Friction has an enormous influence on the motion of an object. Friction is a kind of resistive force which slows down the motion of a body. It can be defined as the force that resists the relative motion of solid surfaces, fluids, or elements that collide or slide against each other. Though friction creates many problems in our daily lives, it plays a vital role in movement and vehicle operation. Here discuss tyre’s surface, smoothness of the road, and the role of friction for controlling motion. Its effect would cause the object in motion to slow down. If the friction is increased, more energy is needed by the object to keep its momentum hence it will slow down.

The speed of the vehicle has to increase or decrease according to the necessity at the time of vehicle movement. That is, we have to control the motion of a vehicle. Brake is such an arrangement, which controls the speed of the car or rotation of the wheels according to the necessity by increasing the friction. With this, it is possible to halt a vehicle in a certain place. When the driver applies the brakes, the shoe or pad made of the asbestos press the metallic disc on the wheel. The friction between the pad and disc slows down the wheel’s speed. As a result, the velocity of a car decreases. For example, we use car brakes if we want to stop or slow down because of the friction created between the brakes and wheels that slow/stop the car down.

The force of friction may alter depending on the following factors that affect it:

What is Centre of Mass?