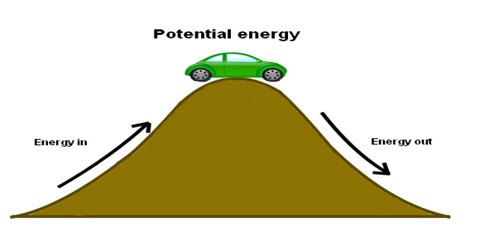 Suppose a piece of brick is kept above the roof, or water is pumped in a tank placed on the roof. In both the cases, the brick and water have acquired some energy. This type of energy is called potential energy.

(a) A spring is attached to a toy motor-car. When you wind this spring, its size becomes smaller. We do work to change this size which remains stored as potential energy. But as the winds are released, the spring regains its original shape. Wheels of the toy are attached to the spring. So, the wheels start rotating i.e., due to potential energy the spring works to move the toy. 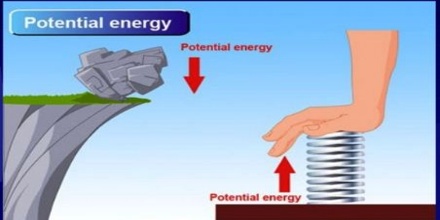 (b) In a wristwatch, a wheel is attached along an elastic spring. While winding this spring, its size gets shrunk or contracted. We do work to change the size of the spring which remains stored as potential energy in the spring. There is the connection of the needle of the watch with the sport so the spring rewinds and rotates in opposite direction. As a result, the needle of the watch rotates. The potential energy of the spring transforms into kinetic energy.

Similarly, when a metal plate is pulled or a rubber is expanded- in all cases due to change of shape potential energy as stared.

(c) Potential energy remains stored due to change of position in water above the ground, ice above the hill and cloud to the sky.

Potential energy is measured by the work that is available when the body returns to its initial normal position or configuration from the present position a configuration.