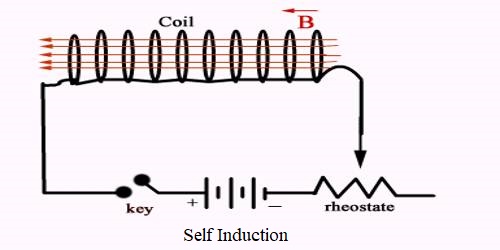 From the experimental results, it is seen that the magnetic flux passing through a closed loop is proportional to the current through that coil.

Let the magnetic flux enclosed be φ due to the flow of current ‘i’ in a coil.

Here L is a constant; it is called coefficient of self-induction or self-inductance. It depends on the geometrical factor of the coil and the permeability of the medium.

So, if one unit of current flows in a coil then the amount of magnetic flux contained in it is called the coefficient of sell induction or self-inductance of that coil.

Again, according to faraday’s law,

From equation (2) we can define L.

So, if the current in a coil changes by one unit per second, then the electromotive force induced in that coil is called the coefficient of self induction of that coil.

1 Henry: If due to the change of one ampere current per second in a coil, one volt of electromotive force is induced in that coil, then the self-inductance of the coil is 1 Henry.