In 1600, Dr. Gilbert, the house physician of Queen Elizabeth proved after many experiments that the earth is a magnet. It has poles like an ordinary magnet. The South Pole is in the north of Canada at Buthia peninsula and the North Pole is at Victoria region of the Antarctica continent. The branch of physics which deals with the magnetism of the earth and related different phenomena is called terrestrial magnetism. 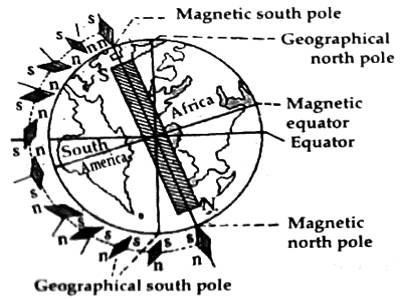 Again, since the north and south poles of a suspended magnet point towards respectively geographical north and south poles, the north pole of an ordinary magnet is called north-seeking pole and the South Pole is called the south-seeking pole. In short, they are respectively called the North Pole and the South Pole. Many people call the geomagnetic North Pole as the blue pole and the South Pole as the red pole. The strength and direction of the geomagnetic field are not same everywhere. They are different at different places. For this reason, if a small magnetic needle that rotates freely through the center of gravity is taken at different places of the earth, its magnetic axis will be inclined at different angles with the horizontal. It has been proved experimentally that if a magnetic needle is progressively taken towards the geographical North Pole, its north pole continues to incline towards the earth and at the geomagnetic North Pole its magnetic axis becomes fully vertical keeping the North Pole downward.

But at the equator and its surrounding places, the magnetic axis of the freely suspended magnetic needle remains almost horizontal.

How Torque on a Bar Magnet Placed in Uniform Magnetic Field