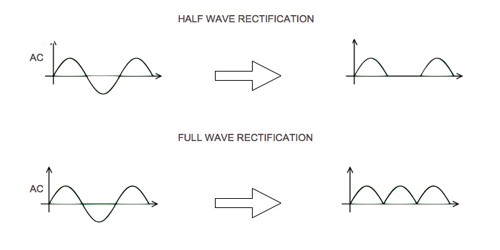 The process by which alternating current (a.c.) is converted into direct current (d.c.) is called rectification and the circuit which is used in this work is called a rectifier. While discussing the characteristics of the junction diode we have learned that a diode allows current to flow in a particular direction. But it does not allow current flow in the opposite direction. This special property of the junction diode is used for rectification purpose. When the positive half cycle of alternating current flows through the positive terminal of the diode then the diode gets positive bias, again, when the negative half cycle of the current flows through the negative end of the diode then it becomes forward bias and current flows.

A rectifier is of two types, viz (a) half wave rectifier and (b) full wave rectifier. AC wave changes direction with time but while going through the diode it produces one directional wave or DC is produced.

Concept – “A rectifier is an electrical device that converts alternating current (AC), which periodically reverses direction, to direct current (DC), which flows in only one direction. The process is known as rectification since it “straightens” the direction of the current.”