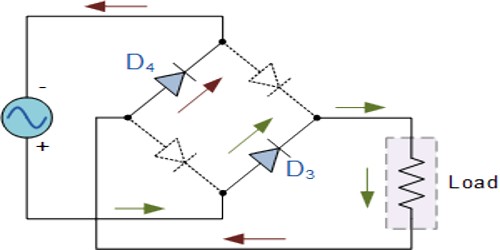 Bridge Rectification is the process by which alternating current (a.c.) is converted into direct current (d.c.) is called rectification and the circuit which is used in this work is called a rectifier. Rectifiers are mainly classified into three types: Half-wave rectifier, Center tapped full-wave rectifier and Bridge Rectifier. All these three rectifiers have a common aim that is to convert Alternating Current (AC) into Direct Current (DC).

In full wave rectification for both half of the input a. c. voltage current flows through the load resistance in one direction. For one half of the input voltage pair of diodes becomes forwardly biased, when the other pair of diodes remains in reverse biased. Again for the second half of a. c. input voltage the first two diodes become reverse biased and the second two diodes become forward biased. So the current flows through the load in one direction. In this way, in both halves of the a. c. input voltage across the load is produced in one direction. This d. c. output is not smooth d. c. but pulsating d. c. i.e., both a. c. and d. c. components are present in the output. In order to get pure d. c. voltage the output is smoothed by a filter circuit.

Advantages and Disadvantages of a Transistor