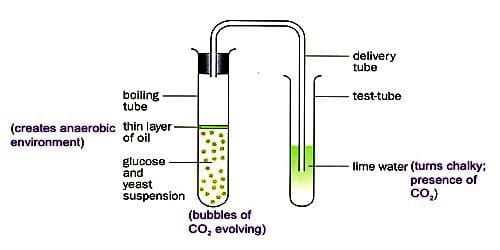 Requirements: One small beaker, one test tube, a stand with clamp, mercury, some gram seeds, a piece of caustic potash and a pair of forceps. Besides, Germinating seeds, a test tube, mercury, Potassium hydroxide (KOH) crystals, petri dish, etc. may also require if you needed.

Here some part filled up the beaker with mercury or related items. The mercury is filled in the test tube up to the rim. Fill up a test tube fulfill with mercury or related items and invert it with the help of the thumb or anything suitable and put it in the beaker containing or preserve mercury. Take a petri dish full of mercury and put the mercury filled test tube in the inverted condition with the help of thumb. Now keep the test tube upright by clamping with a stand in such a condition as if the mouth of the test tube remains in the mercury but not touching the bottom of the beaker. The thumb is removed inside the petri dish. Now introduce some germinating gram seeds into the test tube with the help of a pair of forceps. As the seeds are lighter than mercury, they will float over Mercury. Leave the experimental set for observation. Let this apparatus be put as such for some time. 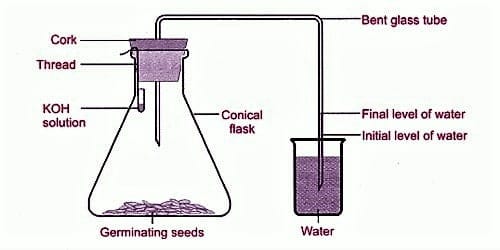 Fig. The experiment of Anaerobic Respiration

The lowering of mercury level in the test tube indicates that some gas has been released by germinating seeds. Only Carbon Dioxide (CO2) gas may be absorbed by Potassium hydroxide (KOH) crystals. We see that with the introduction of Potassium hydroxide (KOH) crystals the level of mercury goes high, hence the seeds have released Carbon Dioxide (CO2) under the anaerobic conditions.