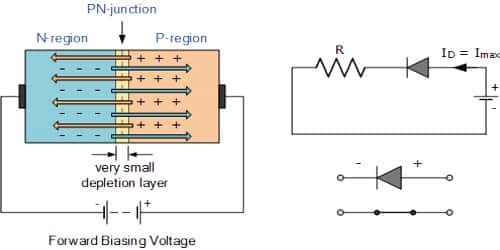 If a p-type and n-type semiconductors are connected by a special technique then the junction surface is called a p-n junction. It is one of the simplest semiconductor devices around, and which has the characteristic of passing current in only one direction only. When a voltage is applied across a diode in such a way that the diode allows current, the diode is said to be forward-biased. From external potential difference can be applied in the p-n junction in two ways, viz— forward bias and reverse bias. Here describe forward bias working principle.