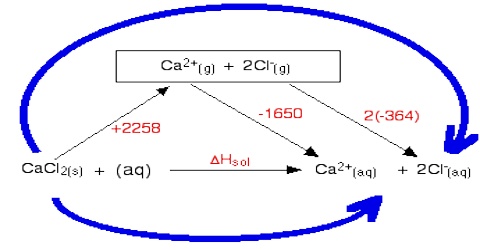 If some ammonium chloride or glucose is added to water in a test tube the tube becomes cooler. On the other hand if some solid NaOH is added to the test tube the water becomes quite warm. These are examples of a common experience that when solids are dissolved in water heat is either absorbed or evolved. In most uses heat is absorbed so that the solution is cooler than what the solvent was before the addition of the solid. Like other enthalpy changes heat change for the solution process is defined as:

“The enthalpy change when 1 mole of substance is completely dissolved in water”.

Two examples are given below:

“The change in enthalpy when one mole of a substance a dissolved in a specified quantity of solvent”.

The enthalpy change in this case is termed as integral heat of solution. Another enthalpy term used is differential enthalpy of solution. The distinction between the two quantities can be shown by the following example.

The differential heat of solution is a partial molar quantity. Hence,

“When one mole of a substance is dissolved in a specified quantity of solvent in a large number of steps the enthalpy change per mole of solid for each step is called the differential heat of solution”.

Calorimetry Determination of Heats of Reaction