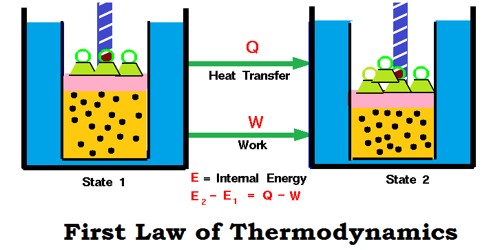 The first law of thermodynamics tells us that energy can be changed from one form to another but can be neither created nor destroyed in any process. This law states that the total energy of an isolated system is constant. Energy can be transformed from one form to another, but can neither be created nor destroyed. However, the first law fails to give the feasibility of the process or change of state that the system undergoes. For instance, the first law fails to explain why heat flows from hot end to cold end when a metallic rod is heated at one end and not on other and vice-versa.

However, this law possesses many limitations such as given below.

Total Entropy Change of a System and its Surroundings