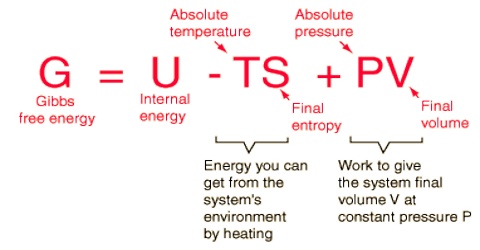 This energy is stable at a stable temperature and volume. It plays a key role in statistical physics.

Like Gibbs free energy the Helmholtz free energy A is a state function. For the change in A,

If we consider an isothermal change at T, it can be shown, as in the case of Gibbs energy, by combining the first and second law of thermodynamics that,

Where U is the internal energy, T is the fixed temperature and S is the entropy. The Helmholtz free energy is a determination of the energy required to create a system after the spontaneous energy transfer from the environment has taken place. The quantity TS is the energy you can get from the system’s environment by heating. The above definition may be obtained from the internal energy function by means of one Legendre transform.

Thus the decrease in this Free Energy is equal to the maximum work done by the system in an isothermal process at constant volume. The Helmholtz free energy function is called a ‘work function’, because of the relationship between A and w. The part of internal energy which is used in useful work called Helmholtz’s free energy (A). It stays constant during any isothermal-isochoric change. For such a system, this free energy tends to minimize as the system tends to equilibrium.

Actually ‘Helmholtz free energy’ is created only for convenience. It is used in the calculation of thermodynamic properties from assessable quantities like temperature, pressure, volume, etc.

For constant volume processes the relations of ∆A to spontaneity and equilibrium may be summarized as follows:

∆A < 0 (negative); the process is spontaneous

∆A > 0 (positive); the process is non-spontaneous