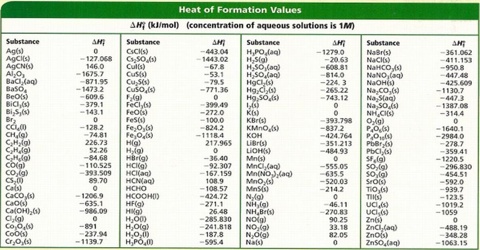 “The standard heat of formation of a compound is defined as the change in hear content, ∆H when one mole of the substance is formed from its elements in the most stable form in their standard stares”. The heat of formation is usually denoted by ΔHf. It is typically expressed in units of kilojoules per mole (kJ/mol).

In chemistry, the heat of formation is the heat released or absorbed (enthalpy change) during the formation of a pure substance from its elements at constant pressure. It is the amount of heat absorbed or evolved when one mole of a compound is formed from its constituent elements, each substance being in its normal physical state (gas, liquid, or solid). In calculating heats of formation, the enthalpies of the elements in their standard states are arbitrarily taken as zero. For example, in the reaction –

The standard heats of formation of many organic and inorganic compounds have been compiled. A few of them are given in Table.

Table: Heat of formation of some compounds at 250 C in kJ mol-1 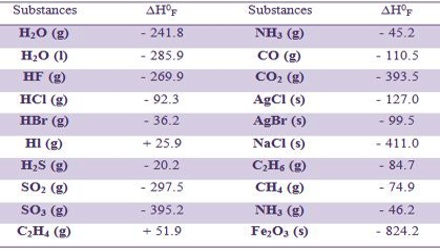 In using this formula the number of moles of each of the reactants and products in the balanced equation for the reaction has to be considered. The heat of formation is the change in enthalpy when one mole of a compound is formed at 25 degrees Celsius and 1 atm from its elements. It has been measured in labs and recorded so that we can look it up when we need it.