Home Chemistry Statement of the Second Law of Thermodynamics 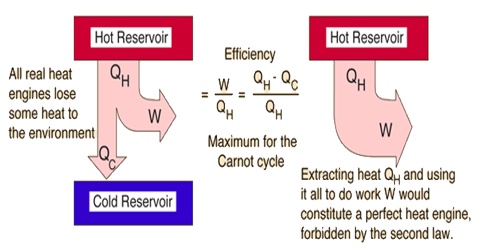 The second law has been stated in many ways which may appear to be different. However, these various statements are all rephrasing of the same fundamental concept. The definitions are,

(1) It is impossible to construct a machine functioning in cycle which can convert heat completely into the equivalent amount of work without producing changes elsewhere.

(2) Heat cannot pass from a colder to a hotter body without some other change occurring at the same time. 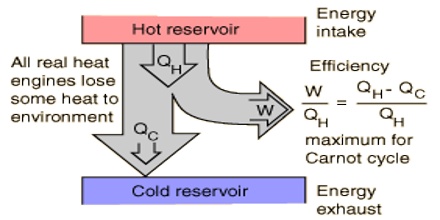 It must again be pointed out that these statements summarize the experience of many men over a long period of time. Except perhaps in submicroscopic phenomena no exceptions to this law have ever been found. In fact, men have tried, without success, to construct a machine by means of which heat could be completely converted into work. It is not to be concluded that the machine is at fault or men have not been clever enough to construct a perfect machine of the desired type; rather the conclusion has been reached that owing to some peculiar property of heat energy itself there are certain limitations on the direction of flow or the extent of its convertibility into work. However, the second law provides a quantitative relationship giving the maximum fraction of an amount of heat which can be converted into work. The relationship may be derived with the help of an imaginary process devised by the French engineer S. Carnot (1824) and known as the Carnot cycle.