Radio is a wide and important medium of entertainment and communication. We can hear news, song, music, drama, discussion, debate and the advertisements of industrial products. Radio is used to exchange information in army and police department. Radio technology is used in the field of mobile or cellular phone communication. The scientists who have made a great contribution to invent radio are Googlielmo Marcony of Italy and Sir Jagadish Chandra Bose of Bikrampur in Bangladesh.

We can hear sound from radio. How is this sound sent and how can we hear it? In the studio of a radio-telecast station, a person speaks before the microphone. Microphone converts that sound into electric wave. This wave is known as audio signal. The frequency or power of this signal is very weak and its frequency range is 20 hertz to 20000 hertz. This wave cannot go far. So this information carrying low-frequency wave is mixed with high frequency electromagnetic wave. This high frequency electromagnetic wave is called carrier wave. This combined wave is called the modulated wave. 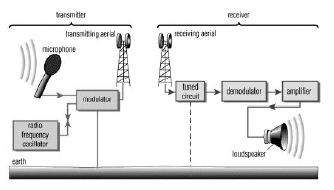 So, the sound is not transmitted from the transmitter to the radio. The sound wave is sent by changing it into electromagnetic wave, the receiver receives the radio wave, the loudspeaker changes it into sound.