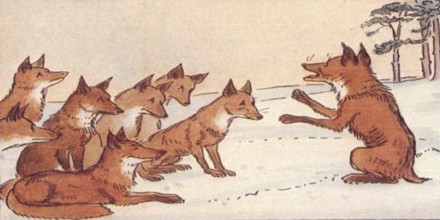 A fox without tail

One day a fox in a jungle fell into a trap. He tried hard to be free and managed somehow but lost his tail. Without the tail the fox looked strange and ugly. He felt sad and ashamed. So he hit upon a plan. He invited all the foxes living in the jungle to a meeting. As the fox was a good speaker, all the foxes came to the meeting to listen to him. The lox was pleased that it, was a good gathering. He rose to speak. He told them that he had made a great discovery.

All the foxes became very eager to listen to him. He told them that their tail was of no use, rather it looked ugly and dirty. He told them that if they cut off their tail, they would look more beautiful and more attractive. He also told them that he himself had cut off his tail to prove it He brought out a knife and gave it to them to follow him. The foxes were convinced and they were about to do that. But among them there was an old and wise fox. He realized the trick of the clever fox. He told the other foxes that the clever fox had not cut off his tail, but he had lost his tail falling in a trap. As he did not have a tail, he wanted the other foxes to cut off their tails.