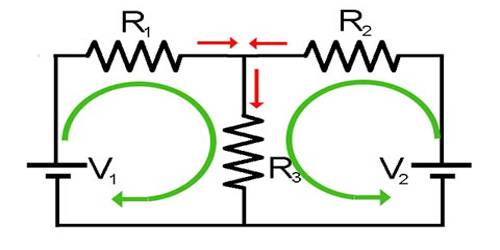 The concept of the laws Current and resistance in a simple circuit can be determined by using Ohm’s law. But if the circuit is complex then Ohm’s law is not sufficient. For this reason, Kirchhoff’s two laws are used to calculate current and resistance in a complex circuit. Kirchhoff’s Laws for current and voltage lie at the heart of circuit analysis. With these two laws, plus the equations for individual component (resistor, capacitor, inductor), we have the basic toolset we need to start analyzing circuits. Of course, these laws can also be used in simple circuits. Kirchhoff’s laws can be expressed in the following ways.

There are two Kirchhoff laws, the voltage law, and the current law. These two laws can be used to determine all voltages and currents of circuits.

Determine Specific Resistance of a Wire by Meter Bridge