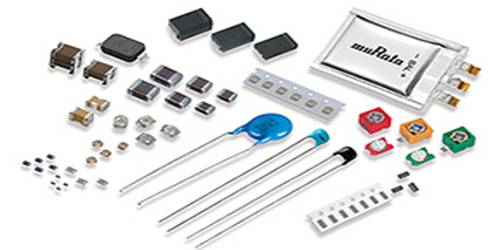 Applications of condensers or capacitors

(i) Variable condenser or capacitor: It is a type of parallel plate capacitor whose capacitance can be varied. The medium between the plates is air. It is used in a radio receiver for tuning purpose and in many other electronic instruments.

This type of capacitor consists of a co-axial two series of semi-circular aluminum plates B and C [Figure-1]. One series B is fixed and the other series can be rotated about the axis. Fixed plates are connected to each other, but are insulated from the rotating plates. The air between the plates acts as a dielectric medium. The rotating plates are fixed to a rod R. So when the rod is rotated plates attached to it also rotate and enter inside or come out of the fixed plates. The effective areas of the capacitors are changed due to this rotation and consequently, capacitance also changes. So, any suitable capacitance can be obtained by this condenser. 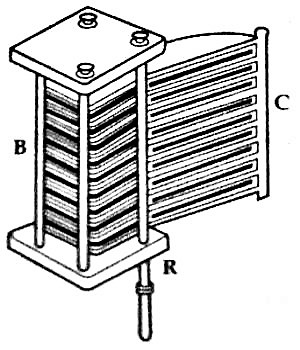 (ii) Fixed condenser or mica condenser: In a radio receiver, this type of condenser is used. This type of capacitor contains some sheets of tin T [Figure-2]. Each sheet is separated from the other by mica or wax-paper M. Odd number of sheets (e.g. first, third, fifth etc.) are connected to each other by a metal rod or a plate which is connected to the circuit at P. Even numbers of sheets are connected to each other by another metal rod or plate which is connected to the circuit at Q. Here the sheets of the tin act as the plates of capacitors and mica or wax-papers act as the dielectric medium and the capacitors are in parallel combination form a capacitor of large value. The charge is given to either point P or Q and the other one is earthed. 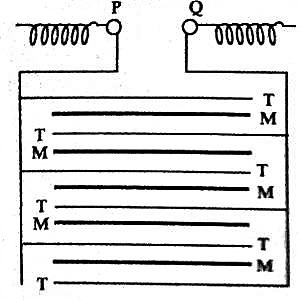 (iii) Paper condenser: For the determination of frequency in the tuned circuit and tank circuit of the electronic circuit it is used (Figure-3). It is a type of fixed value parallel plate capacitor. This paper dipped in paraffin wax placed between the two sheets capacitor made of tin or aluminum acts as a dielectric. The two sheets along with the thin paper are rolled to make it cylindrical. It can be easily made and is available at cheaper price. 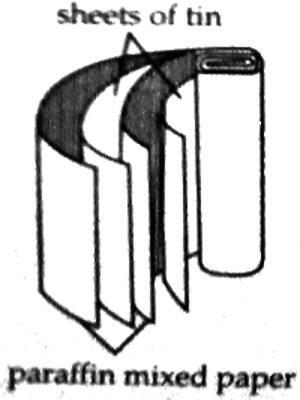 Comparison of emfs of two given Cells Using Potentiometer