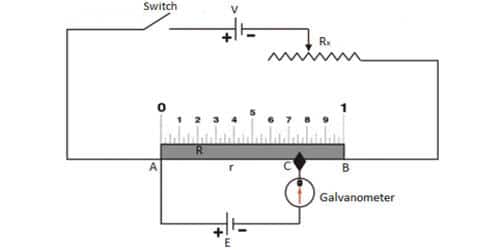 A potentiometer is a passive electronic component. It is an electric instrument that used to measure the EMF (electromotive force) of a given cell, the internal resistance of a cell. Potentiometers work by varying the position of a sliding contact across a uniform resistance. These potentiometers are used in huge quantities in the manufacture of electronics equipment that provides a way of adjusting electronic circuits so that the correct outputs are obtained.

A potentiometer has the two terminals of the input source fixed to the end of the resistor. To adjust the output voltage the sliding contact gets moved along the resistor on the output side. This is a very basic instrument used for comparing the emf of two cells and for calibrating ammeter, voltmeter, and watt-meter. The basic working principle of a potentiometer is quite simple. Suppose we have connected two batteries in parallel through a galvanometer.

since I and r are constants, E α l

Hence emf of the cell is directly proportional to its balancing length. This is the principle of a potentiometer.

Construction of a Potentiometer

A potentiometer consists of a long wire with a uniform area of cross-section. In some cases, the wire may be cut into some pieces and each piece is connected at the endpoints by means of a thick metallic strip. Usually, it will be copper strips. Each piece of wire has a length of one meter. Usually, there will be six pieces of wire and the total length of the wire is six meters.

There are some applications of potentiometer that are given below: Potentiometers are widely used as user controls and may control a very wide variety of equipment functions.

Explain Coefficient of Self Induction

How Emf Induced by Changing the Magnetic Induction?