Home Chemistry The Free Energy and the Work Function 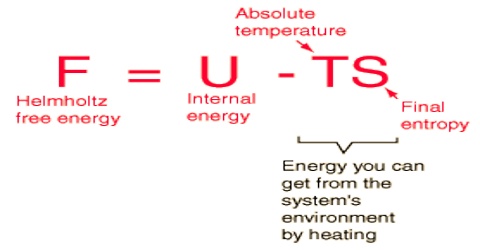 Thus, it appears that spontaneity of a process involve thermodynamic properties -internal energy, enthalpy and entropy. For practical purposes, however, these criteria are generally inconvenient, since it requires knowledge of the properties of the surroundings in addition to those of the substances of primary interest. This inconvenience has been minimized by the introduction of two more thermodynamic functions which are derived from the functions U. H and S. The functions are:

William Gibbs, an American mathematical physicist, developed an equation in 1870s, combining enthalpy and entropy contributions. This equation provided a means to describe energy content and therefore, a means to evaluate the spontaneity at a reaction when that energy content changes. The energy content of a substance was termed the Gibbs Free Energy, G.

H is enthalpy, S is entropy and T is the temperature in Kelvin.

In 1882 the German physicist and physiologist Hermann von Helmholtz coined the term ‘free energy’ for the function. A which is given by, A = U – TS

U is the internal energy and the other terms have the same significance.

The term ‘free energy’, however, now refers to Gibbs free energy, G. The Helmholtz free energy function, A, is generally used to describe the change in a system at constant temperature and constant volume.