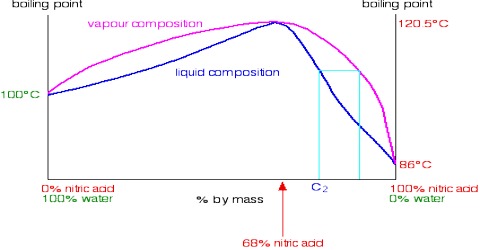 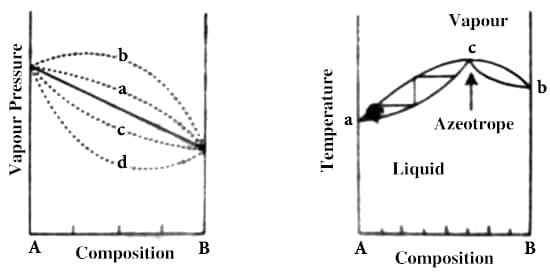 The t – c curve of a mixture showing a maximum is shown in Figure 2, the upper curve is for the vapor while the lower one is for the liquid as in previous cases, and a and b are the boiling points of the pure components. At point c, the mixture has a maximum boiling point and the liquid and vapor in equilibrium have the same composition. If a mixture of composition c is vaporized and then condensed the distillate will have the same composition as the original liquid. A mixture that distills without a change in composition is known as an azeotrope or an azeotropic mixture. A common example of such systems is H2O-HCl. 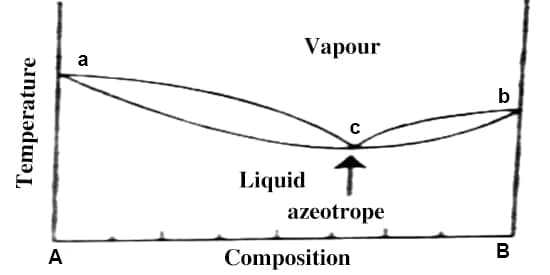 The situation becomes similar if the t-c diagram has a minimum as shown in Figure 3. From whatever side of the azeotrope one may start distillation, the composition soon reaches the azeotropic value and the solution continues to boil at a constant temperature like a pure liquid and prevents any further separation. Alcohol-water, n-propanol-water acetone-carbon disulfides are a few examples of liquid pairs showing minimum in the t-c diagram.

Azeotropes occur when a fraction of the liquids cannot be altered by distillation. Typically when dealing with mixtures, components can be extracted out of solutions by means of Fractional Distillation, or essentially repeated distillation in stages. The azeotropic mixtures boil at constant temperatures and distill the user without any change of composition at a given pressure. If, however, the pressure is changed, both the boiling temperatures as well as composition change. This is unlike pure compounds. For pure compounds the boiling temperature as changed with changes for pressure, but not the composition. For example, H2O boils at 1000C at atmospheric pressure but on the top of a mountain, the boiling temperature will be much lower because the pressure is lower. The composition, however, will always be H2O. In other words, an azeotropic is a mixture and not a compound.

Deduction of the Phase Rule