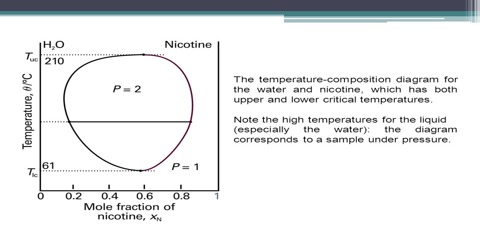 There are pairs of substances which are liquids at ordinary temperatures or whose melting points are low or are known to have limited mutual solubility within certain temperature limits. They are said to be partly miscible in the temperature limits and their solubility curves form an interesting aspect of the application of the phase rule. These substances become completely miscible beyond the temperature limits. These limits are sometimes attained on raising the temperature or sometimes on lowering the temperature. When two different pure liquids are unable to mix in all proportions, they are said to be partially miscible. In some systems, there are two limits, one higher and the other lower. When these liquids are placed in contact with one another and allowed to come to thermal, mechanical, and transfer equilibrium, the result is two coexisting liquid mixtures of different compositions. In this section, an attempt will be made to discuss Nicotine-water systems.

Nicotine-water: The system nicotine-water gives an interesting phase diagram which is a completely closed curve as can be seen in Figure. There are two critical solution temperatures one at 2080C and the other at 610C. Within these temperature and concentration ranges shown in the figure partial miscibility persists and there are two liquid phases shown as L1 and L2. Outside these ranges complete miscibility results. A pair of liquids is considered partially miscible if there is a set of compositions over which the liquids will form a two-phase liquid system. Liquids are never actually completely immiscible. To take an extreme case, liquid mercury, when equilibrated with water, has some H2O dissolved in it, and some mercury dissolves in the water, although the amounts may be too small to measure. This curve looks like the combination of Figures which represent phenol-water and triethylamine-water respectively. Several other pairs are known to behave like nicotine-water. This is a common situation and is the general case for a pair of liquids where one is polar and the other non-polar. Another case that is commonly used in the organic chemistry laboratory is the combination of diethyl ether and water. 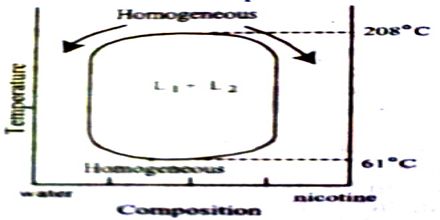 In several cases, the consolute temperature cannot be attained. Miscibility means how completely two or more liquids dissolve in each other. It is a qualitative rather than quantitative observation—miscible, partially miscible, not miscible. This happens due to the disappearance of one of the phases as a vapour above the critical temperature or as solid below the freezing point. Theoretically, their consolute temperatures lie either above the critical temperature or shell below the freezing point of one of the components. Water-chloroform is an example of the first type because before the CST is attained the critical temperature of chloroform is reached Water and ether is an example of the second type. Water freezes to ice before the lower consolute temperature can be attained. FDA has concluded that “Nicotine Water” is an unapproved drug under the Act because it is intended to treat or mitigate nicotine addiction as a smoking cessation product.