Fullerenes are a recently discovered family of carbon allotropes in the form of spheres, tubes or flat planes with unusual and potentially useful properties. The first to be discovered in 1985 was Buckminster fullerene.

The structure is a little like graphite, but instead of never-ending sheets, the hexagons curve round to form a complete sphere – a C60 molecule, have a beauty and elegance that excites the imagination of scientists and nonscientists alike, as they bridge aesthetic gaps between the sciences, architecture, mathematics, engineering, and the visual arts. 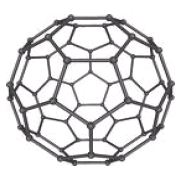 Some elements (such as carbon and silicon) are most stable when each atom forms several covalent bonds to other atoms. This means that some of the molecules have very large, three dimensional structures made up of millions of atoms.

Giant Ionic Structures and their Properties

Why the Value of Equilibrium Constant KC cannot be Zero or Infinity?