The non-bonding interaction between two neutral atoms or two neutral molecules, their intermolecular interactions, is given by the Lennard-Jones equation.

To sketch the above equation we can simplify it to V = – Ar6 + Br12 and separately plot the shape of r-6 and r-12 and then “add” their shapes to arrive at the final shape of the graph as shown in below Figure. The position of the minimum and its depth depend upon the values of A and B (that is upon the values of ε and σ). The – Ar6 term being negative decreases the potential as the molecules get closer, they are attracting one another due to the van der Waals forces. The power of – 6 in – Ar6 acts at longer range than the ± Br-12 term. The + Br-12 term is effective at short range and increases the potential as the distance decreases and the molecules increasingly repel one another. 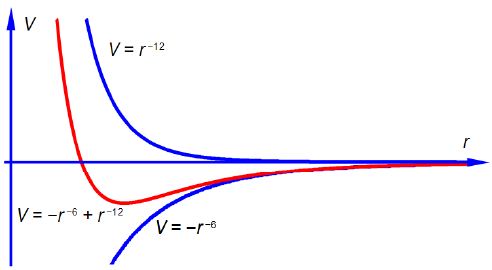