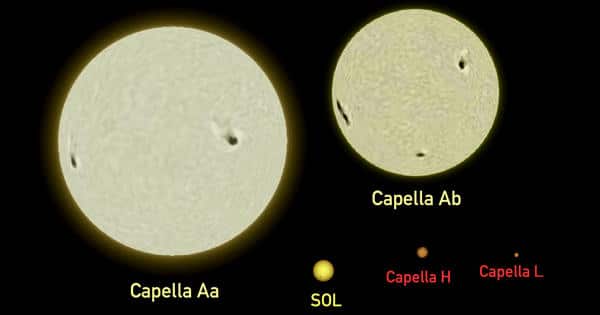 Capella is a yellow star located in the constellation of Auriga, and is also the sixth most luminous star in the whole night sky. It shines nearly overhead in early evenings in late February/early March, as seen from mid-northern America. Meaning “small female goat” in Latin, Capella may appear as a single star to the naked eye, but it is in fact a binary system in which the components are both binary stars in themselves, one pair being giant stars, and the other a pair of diminutive red dwarfs. While Capella appears as a single star to the naked eye, it actually is a group of four stars — two large binary stars, and two fainter binary dwarfs. It is a binary star system 46 light-years away in the constellation Auriga.

Capella is the sixth-brightest star in the sky — and it’s more than one star. The main two stars in the system are near-twins, bright yellow giants.

Capella is the most luminous star in Auriga, a beautiful pentagonal constellation representing “the charioteer” located just north of the constellations Orion and Taurus. At a magnitude of 0.08 and more than 40 light-years away, it’s the sixth-brightest naked-eye star in Earth’s night sky. Another way to find Capella is to draw an imaginary line through the Pole Star to Vega, which is located opposite Capella, almost at the same distance from Polaris as Capella. Sometimes known as the “Goat Star”, Capella’s yellow-orange appearance at times makes it hard to distinguish the star from the planet Mars.

The star Capella is located just a few degrees northward of “The Kids”, a triangle formed by the neighboring stars Epsilon, Zeta, and Eta Aurigae. It’s visible for most of the year in the Northern Hemisphere. As such, it is the closest first-magnitude star to the celestial north pole.

Capella is the brightest star in a five-sided pentagonal shape that makes up the constellation Auriga. Look for Capella almost at the zenith during winter in mid-northern latitudes; however, for observers in much of the northern hemisphere, Capella is visible right through the year, depending on time and location. The shape is difficult to reconcile with the idea of a man driving a chariot, but it’s a noticeable pattern and easy to find. In fact, Capella is not visible to observers south of latitude 44 degrees N, which area includes much of southern New Zealand, Chile, Argentina, and the Falkland Islands.

Without optical aid, Capella appears as a single star, but it is in fact a binary system in which the components are both binary stars themselves. The primary members are two yellow giant stars, designated Capella Aa and Ab. Other stars around the Capella system(s) are designated Capella C to G, and I to K, but they do not form part of the main system, being unrelated stars that fall within the same visual field as the Capella system proper. They orbit about a common center of gravity, separated by only about 0.72 astronomical units, where an a.u. is the distance from Earth to the Sun.

Primary Binary System is comprised of two yellow G-class stars, one being Capella Aa, a G8III giant, with 3.05 solar masses; and the other Capella Ab, a G0III giant that is slightly less massive at 2.57 solar masses. The two stars’ mutual orbit is angled 137° relative to the plane of the solar system, so we get an almost face-on view.

The primary pair are separated by 0.76 AU and have an orbital period of 104 days. The primary pair is a non-eclipsing binary, meaning that from our point of view, neither star passes in front of the other during their 104-day orbit around each other at a distance of 100 million kilometers. The two stars are so close, they can’t be split visually with ordinary equipment and are only just resolvable with the Cambridge Optical Aperture Synthesis Telescope (COAST), so don’t be disappointed when your telescope only reveals a single yellowish-white point. Both stars in the primary system have burnt all of their hydrogens, and as a result have morphed into giants, although their exact location on the main sequence is uncertain. The stars are now both cooling and expanding into the red giant phase, in a process that will take another several million years.