H has the lowest electronegativity of any of the non-metals, so all bonds involving H are very polar. Thus compounds with O-H, N-H or F-H will show significant dipole-dipole attraction. These are known as hydrogen bonds. Remember though that these intermolecular forces are still much weaker than full covalent bonds. 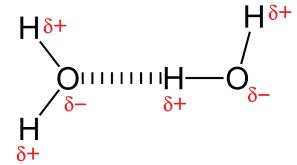 The evidence for London forces is that even elements that are monatomic or consist of diatomic molecules (in which there can be no permanent dipole) do liquify at cold enough temperatures- so there must be some attractive forces between them.

What is Melting Point of Formed Compound? Is it Soluble in Water?