Changes in electron distribution are best described using Oxidation Numbers. Oxidation Number (O.N.) is a way of describing how the electron density around an atom within a compound compares to that around the isolated atom. O.N. can be used for ionic or covalently bonded compounds.

Oxidation number of an atom

Oxidation numbers do not tell us anything about the type of bonding in a compound. Many elements, particularly non-metals can show more than one O.N.

O.N. of an element in the free or uncombined state is zero. Sum of O.N.s in a neutral molecule or formula unit is zero. In ionic compounds, the O.N. of each element is the charge on its ion. The sum of the O.N.s in a polyatomic ion is equal to the ionic charge of the ion. 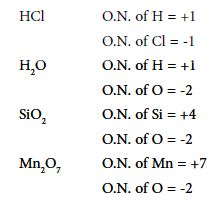 What is a chemical bond?

What is Sigma Bond?