Home Chemistry What are Necessary Conditions for Formation of Bond? 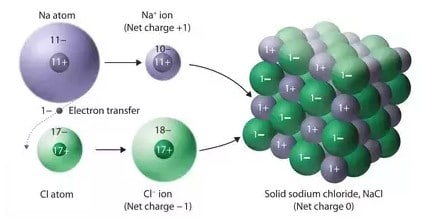 During the formation of ionic compounds positive and negative ions are formed from neutral atoms and then these oppositely charged ions are held in a crystal lattice.

So the necessary conditions for the formation of a bond are:

Each of the two combing atoms should have 5, 6 or 7 electrons in their valence shells or the outermost shells. In such cases, both the atoms achieve the stable octet by sharing 3,2 or 1 electron pair respectively. Similarly, more is the ability of a non-metal to attract the electrons towards itself more easily it will form an anion. Hence, non-metal should be of high electronegativity.

Hence, the ionic bond is formed between Na and CI atoms.