There are 14 different types of crystal unit cell structures or lattices are found in nature. However most metals and many other solids have unit cell or crystal structures described as face centered cubic or Hexagonal Close Packed and body center cubic.

Sodium chloride is a face-centred cubic lattice as seen below. 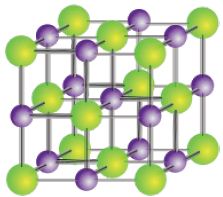 In sodium chloride each Nat ion is surrounded by six Cl- ions and vice versa. This is known as 6:6 coordination. The number of nearest neighbours to a particular ion is called its coordination number. The sodium chloride lattice structure has a face-centred cubic arrangement. The ionic radius of Nat is 95 pm and that of CI’ is 181 pm. This structure is generally adopted by other ionic compounds in which the anion is somewhat bigger than the cation. This optimum arrangement is a compromise between maximum attraction of oppositely charged ions and minimum repulsion of ions of the same charge.

When the positive and negative ions have similar sizes, the crystalline structure adopted is more likely to be that of cesium chloride which has 8:8 coordination. The ionic radius for Cs’ is 174 pm, which is fairly similar to that of Cl- (181 pm).

As well as the sodium chloride and cesium chloride lattices there are other types of ionic crystalline structures. Different structures are found in compounds where the ratio of positive to negative ions is not 1:1.

What is Sigma Bond?