Home Chemistry What is Isotopes? 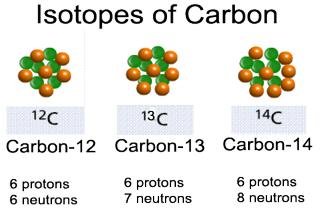 Many elements have more than one type of atom. These atoms have the same number of protons but different numbers of neutrons. Atoms having different mass numbers but identical atomic numbers are called isotopes.

Neutrons, protons (and electrons) have a definite mass, so atoms must have mass. It is convenient to define an atomic mass unit (written as amu or, simply, u) where lu = 1.6605 x 10-24 g. The atomic mass unit is defined with relation to a standard scale. It was originally defined as being equal to the mass of one H atom, but now a more precise scale is used -the carbon 12 scale. On this scale one atom of carbon 12 is assigned a mass of exactly 12u. lu is exactly 1/12 of the mass of one atom of carbon isotope 12.

What is Diluting Solutions?