Home Chemistry Why Silver Fluoride is Soluble in Water but Silver Chloride not Soluble? 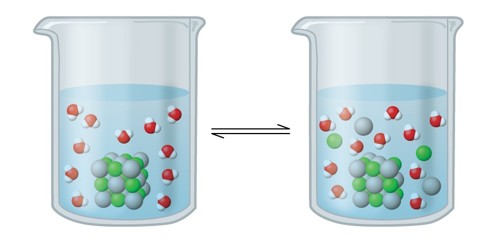 Ionic compounds are generally soluble in polar solvents like water, covalent compounds are not. So if the anion of any salt is very much polarized, a may have so much covalent character, that it may be insoluble in polar solvent. Solubility is a substance’s ability to be dissolved. The substance that is dissolved is called a solute, and the substance it is dissolving in is called a solvent.

For example among; the halides of Silver, Ag+, the fluoride ion in Silver Fluoride (AgF) is least polarized and hence it is soluble in water. F (fluoride) is the most electronegative atom on the periodic table, so, AgF, is an ionic salt solubilized by surrounding water molecules and H bonding. But the halide ions in (Silver Chloride) AgCl, AgBr, and Agl, are very much polarized, so covalent character predominates in these salts and they are insoluble in water. ‘I’ is not very electronegative, so AgI has a more covalent bond, is less polar, and won’t H bond with water. Since polar substances can only dissolve in polar liquids, Silver Fluoride ‘AgF’ can dissolve in water, whereas Silver Iodide ‘AgI’ cannot because it is not polar. The chloride, bromide, and iodide happen naturally as the minerals cerargyrite, bromyrite, and iodyrite, correspondingly. Silver fluoride, AgF, forms colorless cubic crystals; it is much more soluble in water than the other silver halides.

Enthalpy of Fusion of n-Carboxylic Acids?