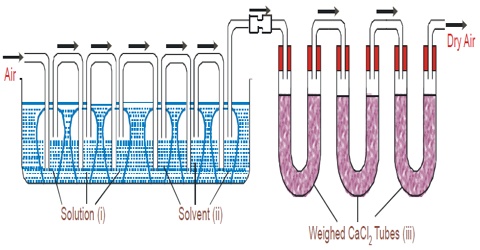 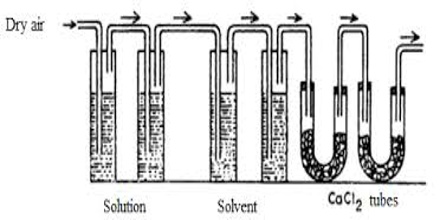 In this method, a stream of dry air is bubbled successively through (i) the solution (ii) the pure solvent and (iii) a reagent which can absorb the vapor of the solvent. As the solvent is usually water the reagent is generally anhydrous Calcium Chloride.

Apparatus: The apparatus used is shown in the figure. It consists of two sets of bulbs. The first set of three bulbs is filled with the solution to half of their competence and second set of another three bulbs is filled with the untainted solvent. Each set is separately weighed accurately. Both sets are linked to each other and then with the accurately weighed set of guard tubes filled with anhydrous calcium chloride. The bulbs of the solution and pure solvent are reserved in a thermostat maintained at a stable temperature.

Since the concentration of the solution is known the molecular mass of the solute is easily calculated. If temperature control is good and this experiment is carried out carefully, the method is capable of giving results of high accuracy. All the bulbs must be reserved at a similar temperature and air must be bubbled slowly to ensure that it gets saturated with the vapors in each bulb. The method is simple and inexpensive. If water is used as the solvent, the absorption tube may be filled with fused anhydrous calcium chloride. The last tube should be guarded against moisture absorption from the atmosphere. If organic solvents are used, as often is the case, the absorption tubes are dispensed with and the results can be obtained by weighing the tubes, A and B. The current of gas should be passed slowly otherwise fine stream of liquid drops may escape with the gas. The total volume of the gas passed should be large so that appreciable loss in mass in the two bulbs may occur.