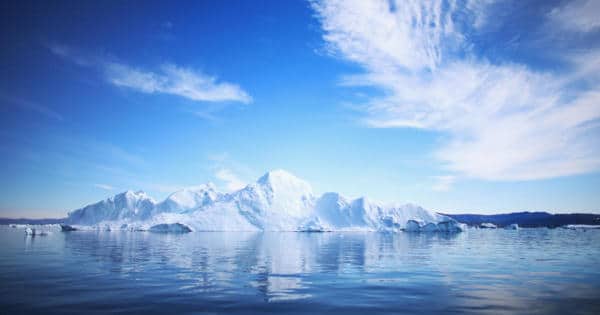 Ice acts as a protective blanket over the Earth and its oceans. These bright white spots reflect heat back into space, keeping the planet cool. In theory, the Arctic remains colder than the equator because more of the sun’s heat is reflected back into space by the ice.

According to a study co-authored by Rutgers, the Antarctic ice sheet is much less likely to become unstable and cause dramatic sea-level rise in the coming centuries if the world follows policies that keep global warming below a key 2015 Paris climate agreement target.

However, if global warming exceeds the target of 2 degrees Celsius (3.6 degrees Fahrenheit), the risk of ice shelves around the ice sheet’s perimeter melting significantly increases, and their collapse would trigger rapid Antarctic melting. According to the study published in the journal Nature, this would result in at least 0.07 inches of global average sea-level rise per year in 2060 and beyond.

This is faster than the average rate of sea-level rise over the last 120 years, and it has resulted in a dramatic increase in days of extreme flooding in vulnerable coastal areas such as downtown Annapolis, Maryland.

A 3 degree Celsius (5.4 degree Fahrenheit) increase in global warming could result in catastrophic sea-level rise from Antarctic melting—an increase of at least 0.2 inch per year after 2060, on average.

The Antarctic ice sheet is much less likely to become unstable and cause dramatic sea-level rise in upcoming centuries if the world follows policies that keep global warming below a key 2015 Paris climate agreement target, according to a Rutgers coauthored study.

“Ice-sheet collapse is irreversible over thousands of years, and if the Antarctic ice sheet becomes unstable, it could continue to retreat for centuries,” coauthor Daniel M. Gilford, a postdoctoral associate in the Rutgers Earth System Science & Policy Lab led by coauthor Robert E. Kopp, a professor in the Department of Earth and Planetary Sciences within the School of Arts and Sciences at Rutgers, said. “This is regardless of whether emissions-reduction strategies such as carbon dioxide removal from the atmosphere are used.”

The Paris Agreement, reached at a United Nations climate change conference, aims to limit the harmful effects of global warming. Its goal is to keep the global average temperature increase well below 2 degrees Celsius above pre-industrial levels, while also pursuing efforts to limit the increase to 1.5 degrees Celsius (2.7 degrees Fahrenheit). The signatories agreed to end global net carbon dioxide emissions in the second half of the twenty-first century.

By 2100, global sea levels are expected to rise by 20-60 mm, and possibly up to 1 meter. This is primarily due to glacier melt and ocean thermal expansion. It does not take into account dynamic changes in ice sheet flow. Because the West Antarctic Ice Sheet rests on land below sea level, it is potentially unstable. It is possible that this will collapse quickly, raising sea levels by 3.2 m within 500 years. This rate and magnitude of sea-level rise has previously been observed in the palaeo record. The West Antarctic Ice Sheet most likely collapsed in the past when temperatures were comparable to todays or projected temperatures over the next few centuries.

Human-caused climate change is raising sea levels, and predicting how Antarctica will contribute to this rise in a warmer climate is a difficult but critical challenge. We don’t know how ice sheets will respond to warming, and we don’t know what the ultimate global policy response to climate change will be. Greenland is losing ice faster than Antarctica, but Antarctica has nearly eight times as much ice above sea level, equivalent to 190 feet of global average sea-level rise, according to the study.

The study looked at how Antarctica might change over the next century and beyond depending on whether the Paris Agreement’s temperature targets are met or exceeded. To better understand how the ice sheet might respond, scientists used modern satellite observations, paleoclimate data, and a machine learning technique to train a cutting-edge ice-sheet model. They used the model to investigate the likelihood of rapid ice-sheet retreat and the collapse of the western Antarctic ice sheet under various global greenhouse gas emission policies.

Current international policies are expected to result in about 3 degrees Celsius of warming, which could thin Antarctica’s protective ice shelves and precipitate rapid ice-sheet retreat between 2050 and 2100. Geoengineering strategies like removing carbon dioxide from the atmosphere and sequestering (or storing) it would fail to prevent the worst of Antarctica’s contributions to global sea-level rise in this scenario.

“These findings indicate the possibility of unstoppable, catastrophic sea-level rise from Antarctica if Paris Agreement temperature targets are exceeded,” the study concludes.

“It is critical to be proactive in mitigating climate change now by active international participation in reducing greenhouse gas emissions and by continuing to ratchet down proposed policies to meet the ambitious Paris Agreement targets,” Gilford said.