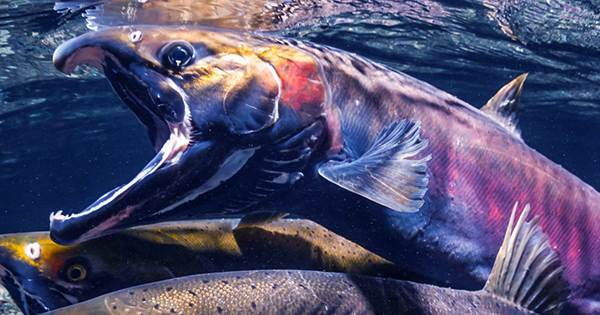 Plastic was created more than a century ago, which sounds reasonable. After all, it is hard to see it passing Shark Tank today: it was created by mining fossil fuels from the Earth, releasing hundreds of millions of tons of greenhouse gases, and then refining them using some of the most energy- and greenhouse-gas-intensive methods available.

Very all of it was thrown away almost immediately, killing a few million animals throughout the planet before ending up in strange areas like space or human placentas for the next few centuries. Maybe it is time for a change. New research in the Journal of the American Chemical Society has sparked some interest in one possible solution: salmon sperm.

The paper begins, “Plastics play vital roles in modern life, and the development of plastic recycling is now very demanding and hard.” “One solution for resolving this conundrum is to produce new sustainable bioplastics that are environmentally friendly throughout their whole material life cycle.”

Hydrogels are commonly thought of as those balls that expand and develop when wet, but the scientists performed the exact reverse in this case. After sculpting their splats into whatever shape they desired, they freeze-dried the gel to eliminate any liquid. This solidified the gel, giving the scientists a usable plastic object. “To the best of our knowledge,” research leader Dayong Yang told The New York Times, “our reported DNA polymers are the most ecologically sustainable materials of any known plastics.”

The authors write that the fishy concoction has several advantages over traditional plastics: “the raw materials are derived from biorenewable resources,” and the manufacturing process is “environmentally friendly,” emitting 97 percent fewer carbon emissions and avoiding “high energy consumption, the use of organic solvents, and the production of byproducts” than traditional polystyrene plastics.

To begin with, they are quite reusable: merely submerge them in water, and the item will transform into the hydrogel, ready to be fashioned into something new. When you are done with your jizz-based Terminator T-1000, all it takes is an “enzyme-triggered regulated deterioration under moderate circumstances” to completely degrade the bioplastic.

The researchers have already created puzzle pieces, a replica of a DNA strand, and a coffee cup out of part of this bioplastic. You are not incorrect if you think that the last one is a little misplaced, given the plastic’s inclination to revert to a hydrogel when it is exposed to water. That is why the team envisions its invention used for items that cannot get wet, such as electronics or certain types of packaging.