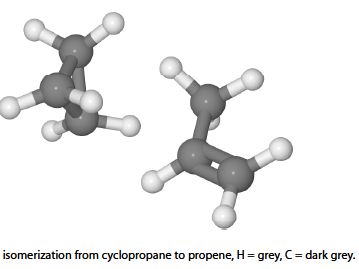 The double full-arrows indicate that the reactions have not yet come to equilibrium. During the algebraic manipulation the following kinetic equation is obtained.

where A* is a reaction intermediate which is chemically different from A and is roughly “half way” between the structures of A and B. The Lindemann mechanism of isomerization will be covered later on in your Chemistry lectures. The square brackets indicate concentrations of the different molecules A and A* involved and for clarity the units have not been shown. Rearrange the equation to get [A*] the concentration of the reaction intermediate as the subject.

The intermediate concentration [A*] is obtained as the subject by: (1) moving the term which does not involve [A*] to the right hand side by subtracting k1 [A]2 from both sides; (2) multiplying throughout by —1 to make all three terms positive; (3) taking [A*] outside the two terms on the left hand side; and finally (4) dividing left and right by (k2 [A] + k3) and cancelling out top and bottom of any single term.

We cannot cancel out the variable [A] top and bottom in the final equation because the denominator has a plus sign in it (the same would be true if it had had a minus sign) and so the denominator consists of two separate terms, not one single term. You can show this is true by examining the numeric example below.

Theoretical Explanation of Energy of a Single Photon