Home Chemistry What is Atomic Structure?

An atom was once thought to be the smallest part of something that could exist. In 1897, JJ Thompson discovered that by applying high voltage to gases at low pressure, he could produce tiny, negatively charged partides that he called electrons. These left behind the positively charged nucleus of the atom. So an atom must be made up of several different types of smaller particle. The first attempt to describe atomic structure was Dalton’s ‘Christmas pudding’ model as shown below. 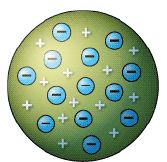 A more accurate understanding was revealed by a classic experiment carried out by Ernest Rutherford’s students Geiger and Marsden. Their experiment disproved Dalton’s model and revealed the following particles: electrons (blue and negative), protons (red and positive) and neutrons (green). 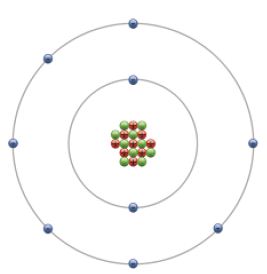 Protons and Neutrons are found at the centre of the atom in the Nucleus. The nucleus is extremely small but dense. Protons have positive charge, and neutrons have no charge, so the nucleus is positive. Most of atom is empty space. Nucleus is a ≈ 10-15 m diameter whereas atoms are ≈ 10-10 m in diameter.