Home Chemistry What is MRI?

MRI is Magnetic Resonance Imaging i.e. a process of determining diseases by magnetic resonance, which is performed in 15 to 90 minute according to part of the body.

Principle: In MRI machine, when current is started flowing in the wire, a strong magnetic field is created. Another coil of the magnet then sends or receives the radio wave. Consequently, protons of the body become excited by absorbing radio wave. Excited molecule sends signal to the computer of MRI machine by releasing excess energy, which captures the image of the related part of the body in the movable carbine. From the image, the disease can be determined.

Process: Using the property of magnet in atom, magnetic resonance signal of the nucleus is captured 70% water exists in our body cell. The hydrogen atom of

water is NMR active atom. ‘H’ atom works as the small magnet and spins in its own axis. 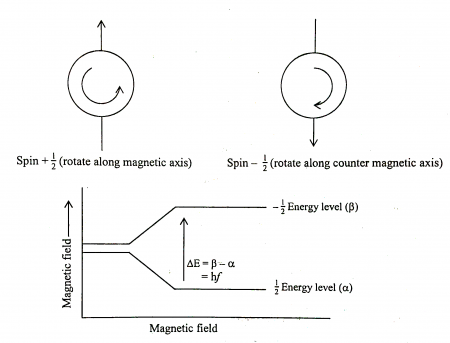 —level). For general reason more H—nucleus is situated in

—level. In this test, when electrical magnetic radiation is sent in the sample, H—nucleus in the lower level absorbs energy and transferred to the higher level (

—level) and give the signal by establishing resonance.
NMR signal which is received from many H2O molecules of the cell is processed by the computer to gain an idea about circumstances of the organism. If the circumstance is abnormal, then it is indicated as disease and disease are identified.