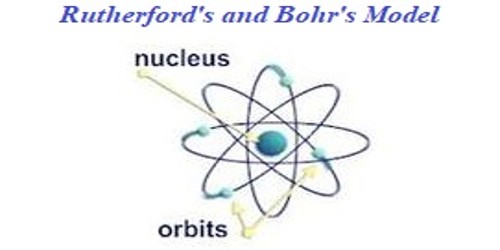 (i) Rutherford describes the atom as a tiny dense, positivity charged cored called a nucleus, in which nearly all the mats are concentrated. He confirmed the existence of protons. He pictured in his model that electrons are in motion around the nucleus. Rutherford model states that – “an atom is composed of a middle core where nearly the whole mass of that atom is determined, and light weight particles move around this middle core.”

According to Rutherford’s model, electrons may move anywhere within the volume of space around the nucleus. This concept contradicts the atomic model that was later proposed by Neils Bohr. Bohr made restrictions on the movement of electrons by imposing pictures of electrons in an orbit around the nucleus. In his theory, he used the quantum rule which was introduced by Max Planck.

However, Bohr gave Rutherford’s atomic model a shell structure in which electrons correspond to specific orbits with a discrete energy level. He concluded that an atomic has specific, allowable energy levels called stationary states in which electrons occupy a fixed circular orbit around the nucleus. He fixed and approximately located the presence of electrons in orbital surrounding by using quantum mechanics principles. 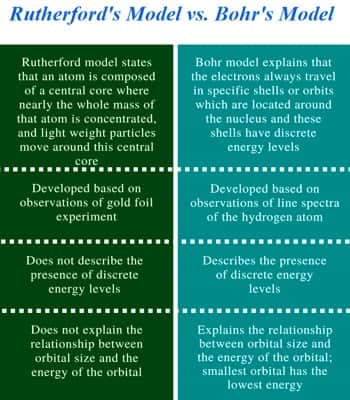 In brief the comparison between Rutherford’s and Bohr’s model –

Observation: Rutherford’s model is based on gold foil experimentation and the Bohr model is related to the hydrogen line spectrum.

Electron: Rutherford described the atom as consisting of a miniature positive mass enclosed by a cloud of negative electrons. Almost the entire mass of an atom is concentrated in the nucleus. Bohr thought that electrons orbited the nucleus in quantized orbits. An atom is made up of three particles: electrons, protons, neutrons.

Atom consistent: Rutherford’s model states that atom consists of a middle core where approximately the whole mass is determined. In Bohr’s atomic model, the protons and neutrons are located in a small nucleus at the center of the atom.