G.P. Thomson in 1928 performed experiments with thin foil of gold in place of nickel crystal. He earliest established that atoms are really composed of aggregates of charged particles.

He observed that if the beam of electrons after passing through the thin foil of gold is received on the photographic plate placed perpendicular to the direction of the beam, a diffraction pattern is observed as before (Figure). This again confirmed the wave nature of electrons. 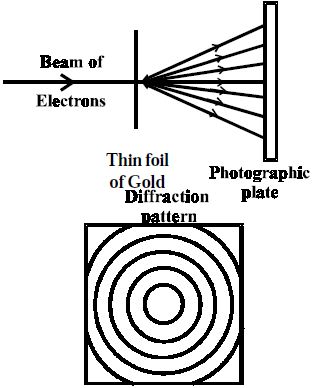 Prior to Thomson’s experiment, it was assumed that atoms were the elementary building blocks of matter. The first indication contrary to this notion came when people began studying the properties of atoms in large electric fields.

Substance is more static than butter