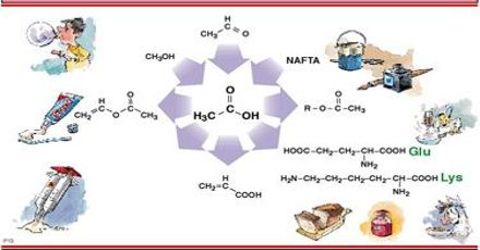 Ethanoic acid is a chemical with a sharp, caustic smell. Considered a weak synthetic acid, it is still a powerful chemical. The major applications of ethanoic acid are to manufacture compounds important to a variety of industries. It has many uses in industrial, medical and household settings. Commercially it is used in the manufacturing of esters, vinegar, and many polymeric materials. The sole largest application for ethanoic acid is the production of vinyl acetate monomer, a component in adhesives and paints.

(iii) Ethanoic acid is used as a reagent in the laboratory. It commonly serves as a chemical reagent in laboratories, but also on a larger industrial scale. It is used in the manufacture of plastic items such as bottles other synthetic materials.

(iv) Ethanoic acid is a colorless, sharp-tasting liquid with the characteristic smell of vinegar. Vinegar is used in the preservation of fish & meat. Pickling vegetables and fruits with vinegar preserve them because this acid prevents bacterial growth. It is also used in;

(v) Ethanoic acid and vinegar have several medical uses, including the treatment of stings from jellyfish. If applied immediately after a sting from box jellyfish, it can prevent serious injury or worse. It can be used as an antiseptic against pseudomonas, staphylococci, enterococci, streptococci, and others. It is also used in cervical cancer screening. It is also used for the treatment of outer ear infections like the growth of fungus and bacteria.

(viii) It is commonly used in photographic materials such as film and chemical solutions. It is also used in the petroleum industry and is used to plate and treat surfaces, such as on cars.

(x) It is used as a solvent for various reactions which require a protic solvent. It possesses both antifungal and antibacterial benefits. It is mainly used in the production of vinyl acetate monomer, acetic anhydride, and ester production.