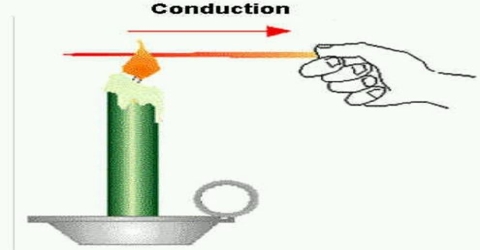 Procedure: Make the wax soft by heating it moderately. Add a little soft wax on the handle of each spoon. Now place the coins on the wax with pressure so that the coins get stuck on the spoon. Take about 300 ml water in the beaker and put it on the spirit lamp. Now immerse the three spoons on the beaker by holding them with threads in such a way that the coins stay outside the upper portion of the beaker. Light up the sprit lamp and continue to heat the beaker. Carefully observe the coins. Use the stop watch to record the time to determine the tune taken by each coin for being separated from the spoon. 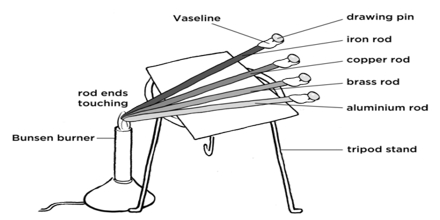 Analysis: From which spoon do the coins get separated at first and from which it happened last of all? Why are the coins separated? Undoubtedly the coin on the aluminum spoon is separated at first because the aluminum is a good conductor. So, heat from the hot water in the beaker reaches the wax of aluminum spoon comparatively faster through conduction. As a result the wax melts down and the coin is separated. On the other hand, as the thermal conductivity of plastic is the least among the three, the heat from the hot end of plastic spoon transmit slowly to the cold end that is towards wax due to conduction. As a result, it takes a longer time to melt the wax and the on it coin become separated last of all. Again, thermal conductivity of wood is less than aluminum but greater than plastic, so heat reaches the wax on wood faster than plastic but slower than aluminum. As a result, the time taken to separate the coin from the wax of wooden spoon is more than aluminum but less than plastic.

What is Food Safety?

Is Gelatine a Bacteria Acid?